Criss Angel, the biggest name in magic on the planet, will be thrilling fans when he comes to River Rock Casino Resort for a two show event on Saturday, March 21, 2020 at 7:00pm & 10:30pm.

For more than a decade, Criss has dominated the world of magic. His hit series MINDFREAK on A&E is the most successful magic show in television history, resulting in more hours of magic during primetime than any other magic show ever. The series continues to be watched regularly by more than 100 million viewers in over 90 countries.

Criss has also been a staple on the Las Vegas strip for more than ten years. Criss Angel BeLIEve at the Luxor Hotel & Casino was hailed as the best-selling magic show in Las Vegas for years. In 2019, Criss debuted his new show, Criss Angel MINDFREAK, at the newly renamed Criss Angel Theatre at Planet Hollywood Resort & Casino. With never-before-seen sequences as well as 75 of Criss’ iconic signature illusions, MINDFREAK transports audience members into Criss’ mystical world.

Criss has received numerous awards throughout his career. Most recently, Criss was honoured with a Lifetime Achievement Award from the International Brotherhood of Magicians. In 2019, he received the Greatest of All Time award by Vanish Magazine. In July 2017, the Hollywood Chamber of Commerce honoured Criss with a star on the Hollywood Walk of Fame, across the street from the star of Houdini.

Tickets for Criss Angel RAW The Mindfreak Unplugged Tour go on sale on Friday, December 6 at 10:00 am with prices starting at $119.50 (plus service charges). 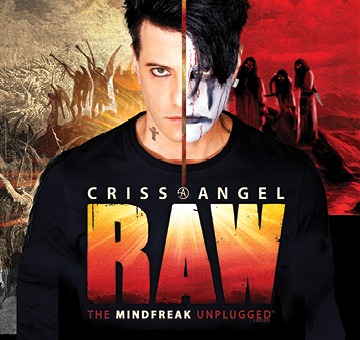