The critically-acclaimed improv comedy show “Whose Live Anyway?” makes its way back to the Molson Canadian Theatre at Hard Rock Casino Vancouver on Thursday, February 22, 2018 and Friday, February 23, 2018, and to River Rock Show Theatre on Saturday, February 24, 2018.

Originally called “A Night of Improv,” the show premiered in 1999 at Vancouver’s Queen Elizabeth Theatre. Following its initial success, the show’s star and Executive Producer, Ryan Stiles of “The Drew Carey Show” and “Two and a Half Men,” expanded the number of dates to include several major cities across North America.

“Whose Live Anyway?” features Ryan Stiles along with fellow comics Greg Proops, Jeff Davis and Joel Murray. Together, they perform many of the hilarious games made famous on their Emmy-nominated TV series, “Whose Line Is It Anyway?,” which aired from 1998 to 2004 and returned to the airwaves in 2013.

Audience participation is key to the live stage show, so all ticket holders are encouraged to bring their suggestions and they may even be asked to join the hosts on stage. Tickets go on sale Friday, November 24 at 10:00 a.m. with prices starting at $49.50 (plus service charges). For more information and to purchase tickets, visit HardRockCasinoVancouver.com and RiverRock.com 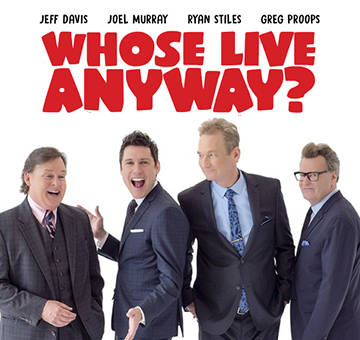