Rajeshni’s passion for food and cooking started when she was a little girl growing up in Fiji. Being from a traditional Indian Family she was taught about ingredients and how to cook from a very young age. She enjoyed being in the kitchen so much that it was obvious that her future would involve some sort of career in the culinary world.

In 2004, when she was 19, Rajeshni moved to Canada. This move gave her the opportunity to learn about other cuisines and to go to school and master her art. She studied at the Art Institute of Vancouver and after graduating a one year culinary program she landed her first job here at River Rock back in 2006.

Raj says that one of her favourite part of working at Tramonto is the team she gets to work with every day. “Everyone is different, we are from different backgrounds, and have different talents and different education. Sous Chef Robert Mackay is such a talented chef and a really nice person; it is great working for him. “

The Tramonto menu changes often which gives Rajeshni the opportunity to learn lots of different things and one of her favourite dishes to make is Gnocci which is made fresh in-house.

If you want your cooking session to run as smoothly as Raj’s do, she suggests you get organized… “Some people are put off or are worried about all the steps required when you are cooking, but the trick is to organize yourself beforehand. Prepare everything, chop, slice and measure it all out before you start and then it is not that difficult.”

She also has another tip about what to look for when buying and cooking meat. “There are many different cuts of meat out there and they vary in price greatly. You don’t always have to go with the most expensive cut of beef. Braising is a really easy and tasty way to cook beef and you don’t have to spend too much money on an expensive cut of beef, also when braising you don’t have to worry about over cooking the meat.”

On Raj’s night off you may find her eating at Mirch Masala, Vij’s or Little India, and if she’s not out eating curry she is probably watching Hell’s Kitchen, Top Chef Canada or Chopped!

Rajeshni has been kind enough to share her lamb curry recipe with us, why not give it a try?

In a frying pan heat all the ingredients together then grind it with a pestle and mortar. This masala can be used for making any curried recipe. 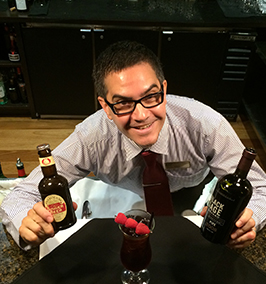 Try it at Home – All the Kings Men

Tracy shares his favourite drink with us this issue – All the Kinds Men
Mix Tequilla, Port, Lemon Juice, Honey and then topp with ginger beer

With the harvest season soon approaching, this is an easy recipe that will delight all your dinner guests: Make lots of it, and save the rest for lunches that will make all your office coworkers envious. 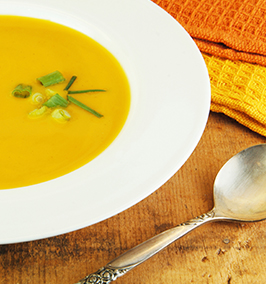 First you need to roast the butternut squash:

Once the butternut squash has been roasted prepare the soup:

This month for the Tramonto newsletter we have chosen to feature two boutique wineries from the Okanagan, Synchromesh Wines and Le Vieux Pin.

Synchromesh Wines is owned and operated by Alan and Amy Dickinson in Okanagan Falls. Their winery is a small, family run operation focused on producing terroir-driven, world class Riesling, Pinot Noir and Cabernet Franc. We are featuring their Flagship wine from Synchromesh’s home vineyard, the 2013 Storm Haven Riesling. Alan, who is also the winemaker, has this to say about the wine:

“The 2013 vintage had an early start and a hot, dry growing season that brought excellent ripeness and a very early harvest before September rains could impact the crop. Hand-picked in two separate passes to bring complexity and the benefit of differing levels of ripeness, this Riesling might be our best to date.

Mineral driven with apricot, mango meat and a citrus profile with a long finish and delicate balance, this wine will develop for decades in the cellar.” The Storm Haven Riesling is the perfect pour for our Dungeness crab cake. We offer this wine by the bottle for $70.

Le Vieux Pin takes its name from the majestic old pine tree in their home vineyard “Le Grand Pin” on the Black Sage Bench in Oliver. Their goal is to make wines that capture the essence of French winemaking tradition, but with the fruit and character of the New World. The winery has been overseen by Viticulturist and Winemaker Severine Pinte since 2010. The 2010 growing season was challenging with cool weather and record rainfall during spring and late summer. Fortunately, warm fall weather arrived in mid-September and continued throughout October. The result was vibrant and elegant wines that offer lower than usual alcohol with higher acidity and have firm structured tannins.

In 2012, the Tramonto team partnered with Le Vieux Pin and helped with blending trials that would result the 2010 “Tramonto” Syrah. The wine is comprised of fruit from the Golden Mile and Black Sage Bench. The Golden Mile delivers red scented fruit, white pepper, contributes acid and tannic structure. The warmer Black Sage Bench offers ripe black fruit, black pepper and body. The wine was aged for 18 months in French oak which gives the wine lovely smoke aroma. 49 cases of this wine were produced and the only place that you can get it is at Tramonto. Our Syrah is the perfect match to our grilled beef tenderloin smothered in Cognac peppercorn sauce. This wine can be had by the glass for $15 or by the bottle for $65.

Are you looking for something to do for your next ‘Date Night’? Or do you just fancy a night off from cooking? Come and dine at Tramonto from Sunday – Thursday between 5pm and 6pm and enjoy a three-course meal at exceptional value, only $39. See early bird menu here >> (LINK TO TRAMONTO PAGE)

Join us at Curve on Wednesdays, Thursdays and Fridays between 5pm and 8pm and enjoy live music, feature drink specials and appys.

We are exceptionally proud to announce that River Rock’s Executive Chef, Sylvain Cuerrier has been chosen by his peers to become the newest member of Culinary Team Canada.

Culinary Team Canada is made up of Canada’s finest chefs who have been chosen to represent Canada in the Culinary Olympics. The Olympics will be taking place in Erfurt, Germany in 2016.